Greetings from the head of the party, fellow rogues!

A quick report from the scouting front today, party members! No, I haven’t discovered a trap (unless you’re watching out for your wallet at the moment!), it’s something much better! Loot! The new Rouge Dior Baume line has arrived on New Zealand’s shores (and everywhere else I expect), and your best rogue friend Syl has all the swatches for you! Obviously, these apply best if you are a) a vampire and b) in New Zealand, as these are the particular shades we got here. The Dior International website lists something like 19 shades total, of which we got the selection swatched here.

The line is supposed to be a lightweight, hydrating balm-like lipstick with ‘couture colour’, whatever that means. They do have actual pigment though, so the colour part is definitely right!

If you’d like a review of the formula, Sunny has you covered here (and the new Dior lipliner, too) 😀

Slight caveat to the photos – I took them in a department store, with the SA looking at me as though I was about to do something deviant with the testers >:-( . As a result, I had to flee without getting the exact names, but I have put together what I do know (I ordered them numerically in the display before swatching). There is one mystery swatch, right next to Star – I think I might have double swatched something though, so kindly ignore that one!

Thus, without further ado…the swatches! Please click on a picture to make it larger 🙂 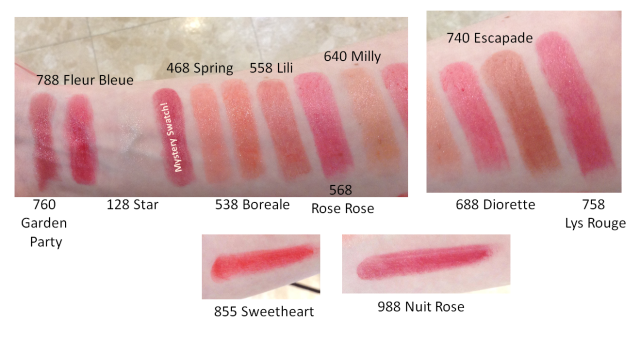 Indoor, warm store lighting. This picture gives a good indication of the glossiness, and the amount/distribution of the pigment.

Swatches outside in cold, later Winter evening light. They look much more matte in this picture, interestingly, but be assured that they are of the sheer/glossy type.

My personal favourite of these would actually have to be Sweetheart – it’s just such a vibrant, glowing warm red that I had to smile when I swatched it! It reminds me a little of Wild Watermelon, though, so if you like the look of it too and are sparing your gold purse, maybe take a look at the Revlon Colorburst Lip butter line – I have a feeling there’ll be a few dupes there!

There are a surprisingly large number of pale, apricot colours in this Dior range, although I am informed that this is because apricot is going to be big this Spring/Summer  – perhaps this is where the ‘couture’ part comes in? ;-). Sadly, the pale apricots aren’t really for me, but there are plenty of other pretty shades in this line. If you’re a fan of apricot though, you’re going to want to take a look! 😀

A note on the texture/pigment (from my perspective). I actually got to swatch almost all-new testers (I think only one had even been touched!) so the initial pass was a bit stiff, but it warmed up and became more balmy and slick on the second pass. I have a feeling that some of the darker/brighter shades (including Sweetheart) might suffer from uneven pigment distribution if you aren’t careful when applying, or if you have flaky bits on your lips. This is only a supposition based on how the pigment applied/looked on my arm, though, so take it with a grain of salt.

I like the concept of this new line, as I am a fan of sheer-but-can-be-built, glossy lipsticks, and balm-y things in general. 🙂

So! What do you think? Have you tried any of these lipsticks? Are you interested in picking any of them up the next time you’re on a makeup quest?

Until next time, fellow rogues, don’t forget to check for loot as well as traps!

I am an adventuring rogue, not a mercenary for hire, and as such, all opinions expressed here are my own, based on a genuine fondness for/interest in this product. If you have any queries or suggestions, please do not hesitate to pin your parchment to the board (contact me) at thepaintedrogue [at] gmail [dot] com., or use the contact form provided! All images and original text on this blog are the property of Syl unless otherwise noted. They may not be reproduced without permission – if you do, I’ll send demons after you. You know, the ones that mush up the testers and open new lipsticks to try them out on their warty lips. Those ones. Yyyep.

Well hello! Welcome to the home of all things rogueish and beautiful. Take a look around - you don't even have to check for traps here, promise! ;-)

A Rogue on The Book of Faces

A Rogue on The Book of Faces 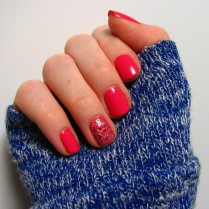 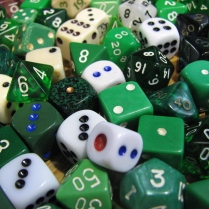 Adventurers assemble! The party members are arguing over who gets to take which awesome coral weapon of Destory Undead. Don’t worry, they’ll get themselves together shortly. 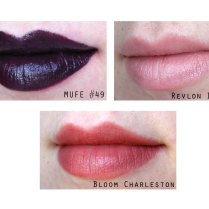 A choice of lipsticks for your Thief: my current favourite ‘nude for pale people’, Revlon’s Lacquer Balm in Demure; Bloom Charleston for a more tawny pink, and an old favourite MUFE #49 for the purple Queen of Beggars! 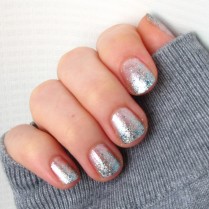 Cuddly sweater shot! This manicure sparkles and glitters something fierce in the sunlight – it’s really quite glorious. Unfortunately, the weather didn’t provide me with any!

The neon is hard to capture, but this recent picture probably does it best. The orcs will flee!

Most of the polishes used in this manicure. This is what happens when two PhD students try to do a manicure. Things get…complicated.

Red poppy lips! We have Lancome for the upper and lower left images, Revlon for the upper centre, naked lips for the lower centre, and two ways to wear Estee Lauder’s Rich Red at the right. 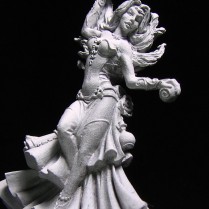 The incredibly photogenic Eilhana, with just enoughof her beauty on display, which is to say, just as much as she wants there to be. 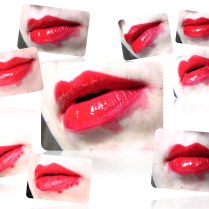 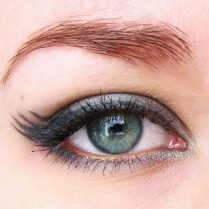 A wearable Zegana-inspired eye look for every day! 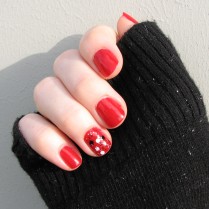 Cuddly sweater shot, this time in direct morning sunlight! It is a well-documented fact that cuddly sweaters are 20X more effective when they also have tiny sparkles in them. 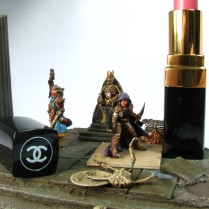 The rogue presents the loot! No traps, no danger, just glorious, happy peach coloured blush. The warrior has taken the druid away for a cup of trea and a lie-down. 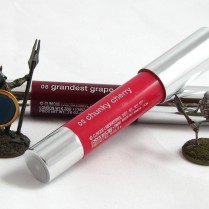 Full on Zegana! This was way to much fun to do, actually.

Quiz Time! Which Beauty Adventurer Are You?

Click here to take my quiz and find out which member of the adventuring party you are... 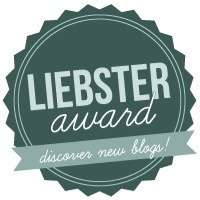